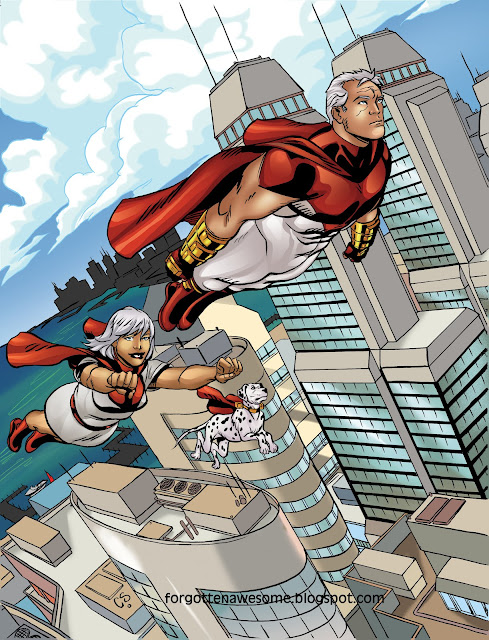 The Big Chill at the top of the Time Tower 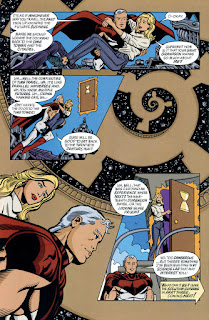 I've mentioned several times (and will mention several more) that I love the League of Infinity and their Time Tower. It was a great device introduced by Moore to drive particularly fun stories. As the Time Tower appeared in this issue, I wanted to use it as an excuse to ask the question, what's at the top of the Time Tower? What happens at the end of time?

It just so happens that Alan Moore wrote a story about a Superman stand-in at the end of time in 1997, at the same time he was writing scripts for Supreme. It's just that he was doing it for Jim Lee's Wildstorm with the character Mr. Majestic.

Moore had written an arc on Lee's WildC.A.T.S immediately prior to starting work on Supreme, and you can see him starting to deal with superheroes in a retro way in those pages. While, in my view, it wasn't completely successful, Moore was happy with Wildstorm and Lee to continue doing odd stories for the company.

In February 1997, Wildstorm Spotlight featuring Majestic came out. It's a one-shot drawn by Carlos D’Anda and inked by Richard Friend. 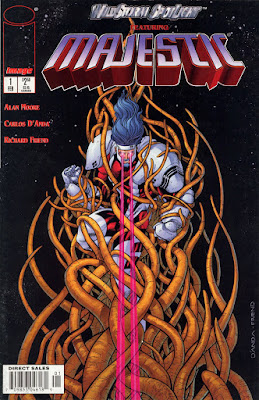 As cold entropy is enveloping the universe, only a small band of survivors are left, including another cosmos' superhero, an intelligent strain of syphilis, a vampire, the wandering Jew, the spirit of arithmetic and a few others. Some decide to stay and die while others decide to move on. 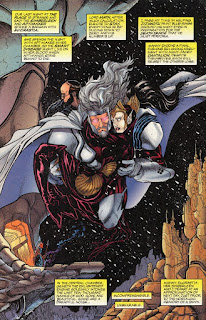 Majestic flies Manny, the wandering Jew, and Eucrastia, the vampire, with Simberleen the syphilis in her blood, on. They detect a radio signal coming from the darkness. They find a Dyson sphere and after finding it empty, form a ship to continue on.

The whole thing reads like a poem: "And so it is that we continue down the chill black River Styx where once poured great cascades of star... We see death's ultimate kingdom in that sparkless dark where nothing can be seen." 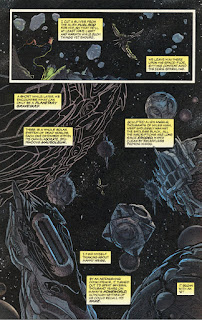 Majestic offers his blood to help Eucrastia survive and is now a carrier for Simberleen. Manny decides to stay within a giant iceberg that is producing small bits of light. Majestic remembers that both he and Manny shared a world for a while, but can only remember that the world began with an E.

Majestic, who has spent all of his days as a warrior, doesn't know what to do at the end now that there is no more war.

Eucrastia: "And what of love?" 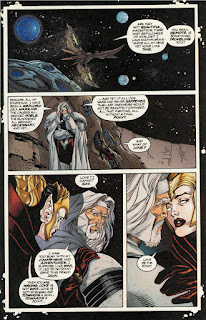 But he had been too busy for love. But he assumes love led to no point.

It's such a beautiful little moment. 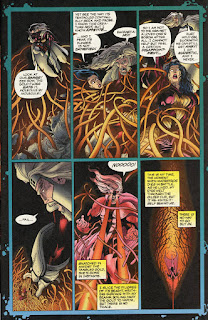 They have sex as she drinks his blood, penetrating each other. (Moore can't help himself, sometimes.)

The syphilis has a say about the moment, too: "Don't pin your hopes on love. Syphilis is by far the safer bet, between the two. Love is not nearly so contagious... and love won't last forever."

So, even at the end of the universe, Moore maintains his cheeky sense of humor.

As Eucrastia lay dying against Majestic's heart, golden tendrils grab onto her and drag her away. Majestic dives into the gilded fur after her, diving toward the center, coming upon someone he knew a long time ago: Spartan, the robot. 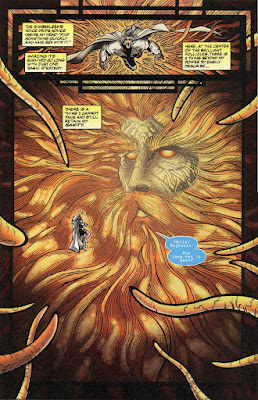 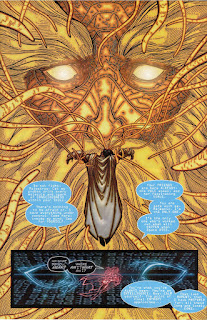 Hadrian kills Majestic, absorbing his consciousness into the robot's programming.

Hadrian tells him that his friends are also there and are preparing for the final moment of entropy. Majestic wonders why since it will mean the end. Hadrian tells him that as temperatures drop toward absolute zero, conductivity increases, so in that final moment, the entire universe will become a superconducter where the weakest impulse will be amplified across eternity. 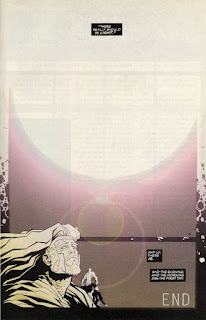 So a new universe will be born from this single thought. As final darkness descends, Majestic thinks: "There really should be light."

So the universe ends. So the universe begins. As with all of Moore's best time stories, there's a loop and the ending becomes the beginning. So too is it with the end of time.

I've talked before about how this was a period of optimism for Moore and few stories epitomize that as much as this one. It's such a powerful little story about the final victory of love and how this all-powerful being now understands love and is ready to begin again.
at December 08, 2017